Ohio’s 12th Congressional District has a reputation for electing moderate Republicans. This is John Kasich territory. The popular governor first won an election here in 1982 as the U.S. representative, and was re-elected eight times. Since 2001, the district has been represented by former Kasich aide Pat Tiberi. Tiberi’s retirement announcement set up an August special election that will determine the next representative of the district, making it a useful case study of battleground terrain in Ohio this election cycle.

Despite decades of strong performance by GOP moderates, Cook Political Report labeled the district a toss-up. Of Ohio’s 16 congressional districts, OH-12 has the highest median household income and the highest percentage of adults with a bachelor’s degree. In a sense, the district is a microcosm of GOP strongholds throughout the country, featuring both the wealthy Columbus suburbs and poorer, more rural communities. The Columbus suburbs are similar to the suburban Pittsburgh and Northern Virginia communities that have swung away from the right and toward Democrats emphasizing worker issues. Making inroads with both wealthier suburban and working-class voters will be critical to Democratic efforts to retake Ohio this fall.

Working America has been on the ground in OH-12, holding face-to-face conversations to get a unique insight into what’s animating voters in this district. In a moment when political orthodoxy has been turned on its head, is OH-12 still a bastion of moderate Republicans? With this project, we set out to understand voter opinion by conducting a large-scale listening project in the district. We spoke with 401 voters in OH-12, which includes communities north and east of Columbus, including Zanesville, Mansfield and Newark. Our canvassers asked voters to rate the job performance of Gov. Kasich, Sen. Sherrod Brown and President Donald Trump, although we didn’t gauge support for the CD-12 candidates. We also wanted to learn how they felt about key issues like jobs, education and infrastructure. Our conversations reveal a window of opportunity for progressives in Ohio.

Here’s what we found:

Trump has lower net approval in Ohio’s 12th Congressional District than in other swing areas, regardless of voters’ partisan leanings.

Among the voters we spoke with, 41 percent approved of the job Trump has done as president, while 51 percent disapproved.

The following table compares Trump’s job approval numbers in OH-12 to PA-18 and IA-01. PA-18 recently sent Democrat Conor Lamb to Congress, despite the fact that Trump defeated Clinton there by nearly 20 points. In contrast, Trump won IA-01 by 3.5 points and OH-12 by 11 points. Trump’s net job approval in OH-12 is substantially lower than in those other districts. Regardless of whether we spoke with a likely Republican, moderate or Democratic voter, Trump has far less approval in OH-12. Crucially, middle partisans in OH-12 are far less approving of Trump than in PA-18 or IA-01. 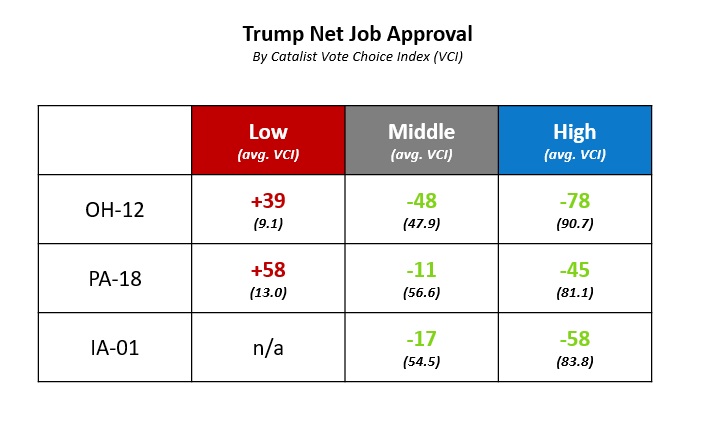 Anecdotally, a notable portion of voters expressed remorse about voting for Trump, or said that their approval was tempered by his behavior, particularly on Twitter.

Theresa, a 47-year-old Trump voter and Delaware resident, said, “Donald Trump should rein back on Twitter.”

The data and anecdotal evidence suggest that Ohio could be turning away from Trump. Lamb’s special election victory in PA-18 has been the biggest upset win for Democrats so far this cycle, and Trump enjoyed higher approval there than in OH-12. Throughout our work in states like Pennsylvania and Minnesota, we’ve seen that Trump support was the strongest predictor of vote choice in other races. These numbers suggest that progressives in Ohio could see similarly dramatic swings in their favor this fall if they run the kind of smart, thorough ground game that we saw in PA-18. 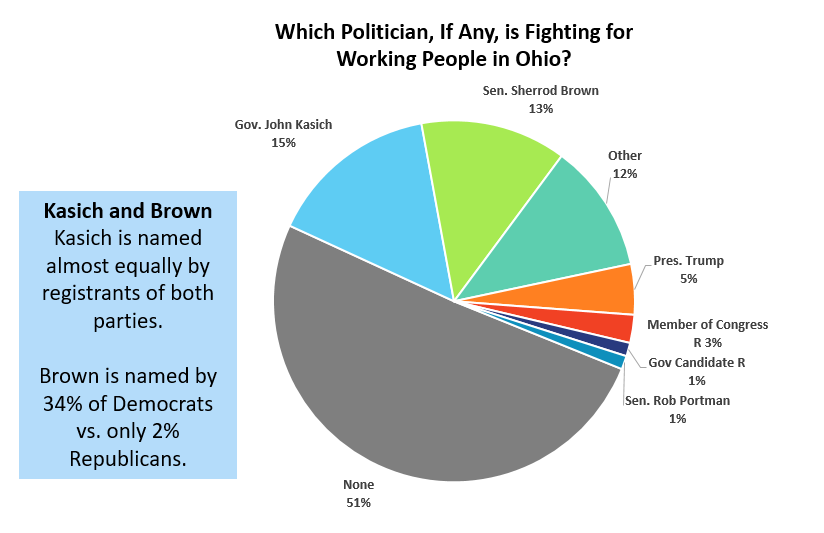 Of the people we spoke with, moderate voters were the least likely to identify a politician fighting for working people, suggesting a possible motive for their mercurial voting behavior. Fully 71 percent of moderate voters said no one was fighting for working people, compared to 51 percent of likely Republican voters and 43 percent of likely Democratic voters. Moderate — or middle VCI — voters lack a strong partisan preference, and they’ll be critical of Democratic efforts in Ohio. These voters represent a substantial portion of the electorate and could help swing the results this fall. 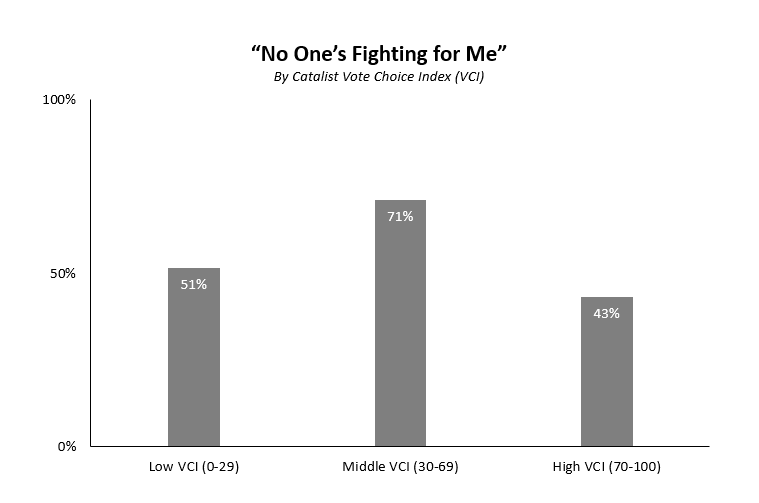 The two most economically depressed counties in OH-12 were much more likely to support Trump.

We asked voters how confident they felt about the economic future of their families and their communities. The following below breaks down economic confidence by county and includes average income. 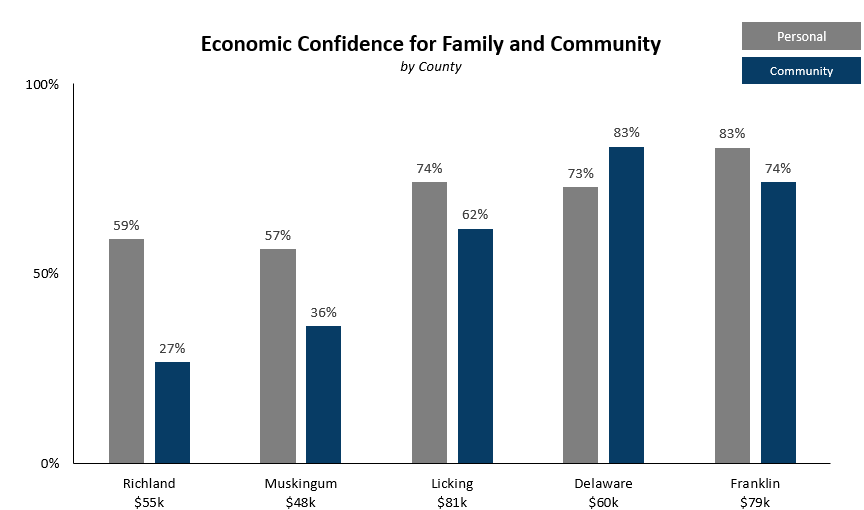 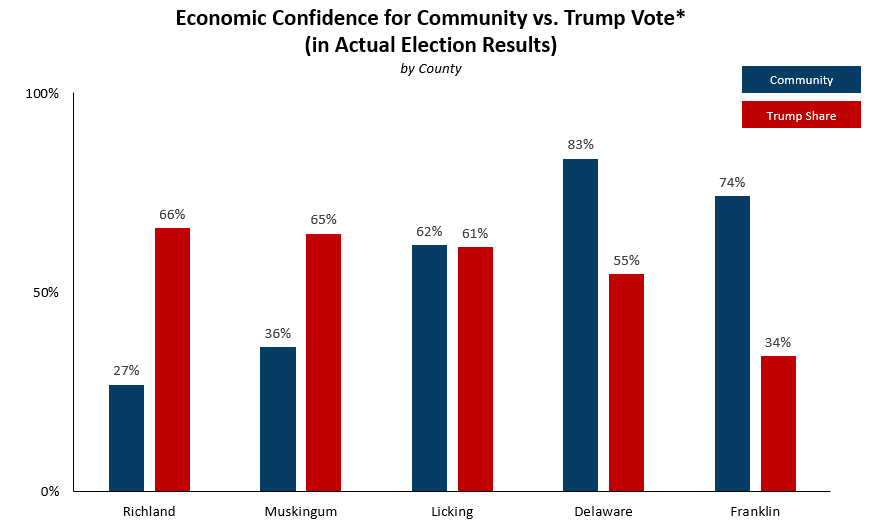 Mark, 59, a resident of Zanesville (in Muskingum County), said he was concerned with a “lack of meaningful employment” in the area. He went on to say, “Training doesn’t match the available opportunities.” 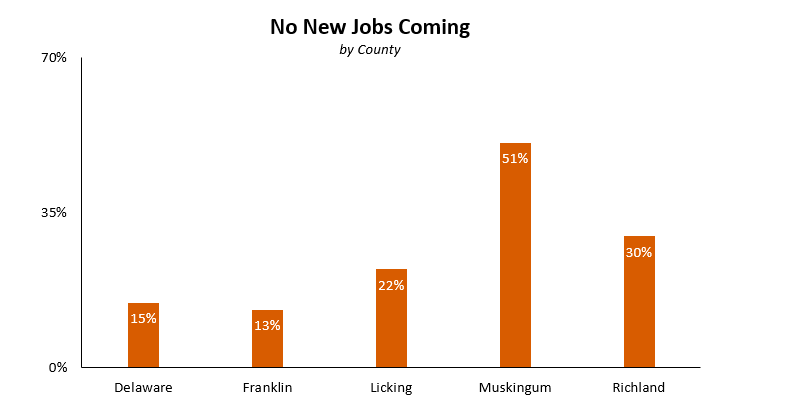 A common refrain among voters we spoke with was that jobs weren’t coming to the area, and that new jobs were only in more urban areas.

Furthermore, many voters felt that job opportunities were undesirable or inadequate.

James, 46, of Newark, referenced a new Amazon distribution center in Etna. He said, “Everyone keeps saying, ‘Just go to Amazon,’ but their quotas and conditions are impossible.”

Shannon, a 32-year-old Zanesville resident, was frustrated with a lack of employment opportunities. She said, “You can either go into health care or fast food, that’s all we have here.”

Sen. Sherrod Brown has an opening with moderate and even likely Republican voters. 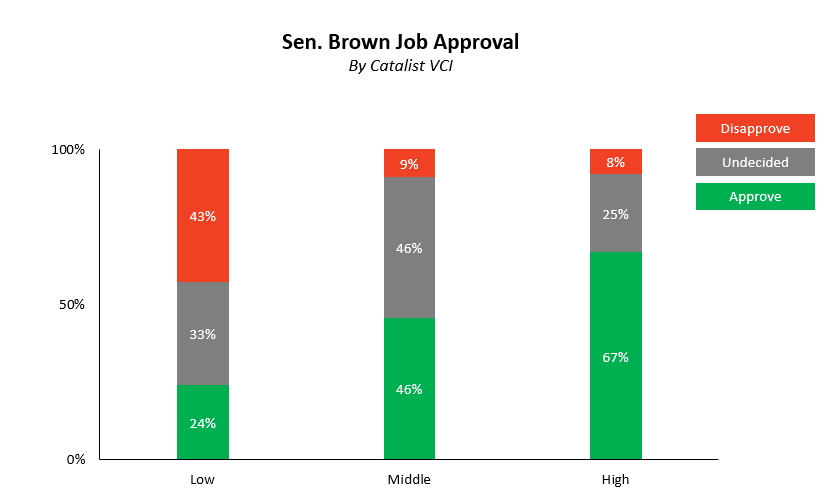 The prevalence of voters undecided about Brown suggests that he has an opportunity to pick up support from swing and likely Republican voters, with the right type of engagement.

When we asked voters about a politician fighting for working people, roughly equal numbers of people named Brown and Kasich. In conversations with canvassers, even some Republicans had good things to say about Brown.

Mark, 59, of Zanesville, said, “I’m as Republican as you can get.” He said he approved of Brown because “he hasn’t had any scandals.”

Many voters described Brown as an honest, uncorrupted politician.

Lawrence, a 66-year-old Gahanna resident, said that he liked Brown because “he’s not beholden to special interests.” 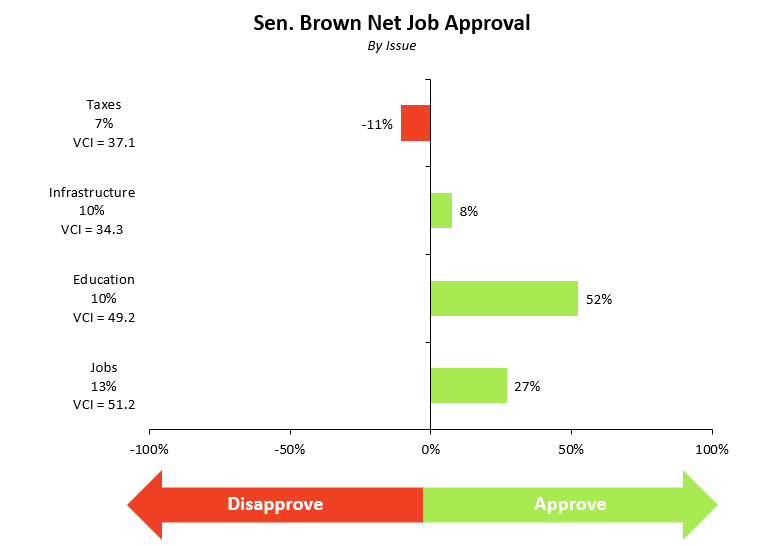 While Brown has a negative net job approval with tax-sensitive voters, he enjoys solid support from voters most concerned with infrastructure, education and jobs. In our other Front Porch Focus Group projects, Republicans generally have performed better with voters who pick jobs as their top issue. That Brown enjoys such a high net approval among jobs voters suggests he’s seen differently than other Democrats.

Infrastructure is a winning issue for progressives in Ohio.

In our work in states like Pennsylvania, Minnesota and Iowa, voters tell us that their top issue is good jobs and the economy. In OH-12, an unusually high number of people picked infrastructure as their top issue.

Again and again, our canvassers spoke with voters who were deeply concerned about roads and flooding.

Sandra, a Gahanna resident in her 60s, said that if she could change one thing about her community it would be to “modernize infrastructure.” She went on to say that “things have looked the same here since I moved from New Jersey.”

Given the decaying local infrastructure and share of people who report having to commute long distances for work, the focus on infrastructure repair is understandable. In fact, when we asked people what they wanted to change in their city, the top response was infrastructure by a significant margin.

Our work in OH-12 suggests that progressives would do well to emphasize infrastructure in 2018 campaigns.

In a key battleground state with two major elections — for governor and senator — Ohio is a top priority for progressives in 2018. Trump’s unpopularity in OH-12 relative to districts like PA-18 and IA-01 — along with the relationship between Trump approval and vote choice — indicates that Ohio may be poised for a Democratic wave election in the fall. Despite the fact that OH-12 has the highest median income of any Congressional district in the state, there are sections where people are struggling economically. These areas broke for Trump, but they could very well swing back toward progressives with an effective engagement strategy that helps restore trust and delivers good information. Particularly on infrastructure, progressives have an opening to connect with Ohio voters. Working America’s canvass-centered model is just what’s needed to directly engage with voters.

From April to May 2018, we held 401 conversations in the counties of Delaware, Franklin, Licking, Muskingum and Richland. Specifically, we canvassed in Delaware, Gahanna, Zanesville, Mansfield, and Newark.

The group canvassed was slightly more female than male, with 210 women and 191 men. The largest age cohort was baby boomers. The average household income of the group canvassed was $65,193. The voters we spoke with were roughly evenly split between Clinton and Trump voters, with 162 and 171 voters, respectively.