Working America
|
Trends from the field and implications for 2020

Trends from the field and implications for 2020

While Virginia has trended blue in presidential elections since 2008, state and local elections often paint a different picture. Due in part to legislative and Congressional gerrymandering, the GOP has long had control of the General Assembly and only recently lost the majority in the Congressional delegation. Moreover, recent scandals involving the top three statewide officials have weakened Democrats and point to a continued vulnerability.

It is no wonder that national Republicans are eyeing Virginia as a potential pickup for President Donald Trump in 2020 — depending on the outcome of the 2019 elections where narrow GOP majorities in both the House of Delegates and Senate are up for grabs. As a GOP strategist explained in a recent Politico Article, "Trump won narrowly in a number of states in 2016. He has to defend all those states and then find a few places where he can effectively go on offense. Virginia should be one of those states."

Some pundits have dismissed talk of Virginia swerving right as wishful thinking, and the Cook Political Report puts Virginia in the “Likely Democratic” column for 2020. However, how state Democrats perform in the fall will likely either embolden or dissuade Trump from making attempts to widen his path to victory through the commonwealth. In many ways, the GOP cannot afford anything short of a full-court press in Virginia this fall when all 140 seats of the Legislature will be in play.

When it comes to down-ballot races, the Old Dominion is no Democratic stronghold. Despite large Democratic gains in 2017, the House of Delegates has been in Republican control since the turn of the century, and Republicans have held the state Senate for 19 of the past 23 years.

The 2019 state legislative elections present an opportunity for progressives to seize control of Virginia state government and move the type of agenda not seen in any Southern state. To secure a state government trifecta, Democrats will need to rack up wins in places such as Prince William and Loudoun counties — the fast-growing northern Virginia suburbs. Locally, these communities are better known for producing right-wing ideologues such as Corey Stewart, who gained notoriety for his harsh immigration stances and staunch defense of Confederate monuments. Indeed, while Prince William County is majority non-white, the GOP holds a dominating 6-2 majority on the Board of Supervisors.

A voter file analysis of voter participation over the last few elections in Prince William County shows that in the 2015 election cycle (the last state Senate and county-level elections), the electorate was older and whiter, compared to 2016 and 2017, respectively. This analysis suggests that engagement with younger voters and voters of color can be a successful strategy in this part of the state. In 2017, three of the 14 House of Delegates seats were picked up by women of color (Jennifer Carroll Foy, Hala Ayala and Elizabeth Guzman) in Prince William County, supporting the theory that engaging young folks and voters of color will be a promising approach in the 2019 and 2020 elections.

To unpack the political paradox of northern Virginia, Working America’s latest Front Porch Focus Group report explores what’s trending in the swing legislative districts in Prince William and Loudon counties, districts that will determine partisan control of Richmond this fall. Working America dug underneath the surface to understand how northern Virginia voters are processing the state and national landscape and how they feel about issues such as health care and taxes.

From February to May of this year, we held conversations with 240 voters in Virginia state Senate District 13, a crucial battleground in this year’s state legislative elections, made up of parts of Prince William and Loudoun counties. These conversations suggest a template for Democrats to not only win a trifecta in Virginia, but also prevail in similar battleground communities in diverse suburbs of cities such as Atlanta, Charlotte and Raleigh-Durham.

There is overwhelming support for increased public education funding and widespread willingness to pay more in taxes to achieve that end.
We asked voters whether they supported raising public school teacher pay, and a whopping 89% of voters said yes, regardless of partisan leanings. 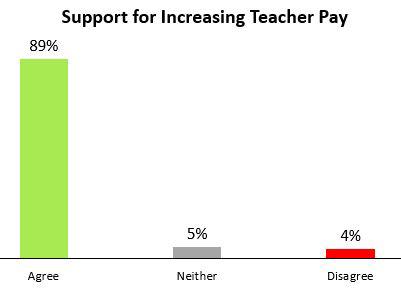 In addition to asking about support for higher teacher pay, we also asked how much more money they would be willing to spend per month in taxes to that end. The chart below shows the average monthly amount voters told us they were willing to pay extra in taxes, sorted by the partisan leaning of the voters. (Note: Because Virginia lacks party registration, we used Catalist VCI scores to impute partisanship. Scores 0-29.99 = Republican or low partisans; 30-69.99 = middle partisans; 70-100 = Democrats or high partisans). Even low-VCI, Republican-leaning voters say they are willing to pay $240 a year more in taxes to increase investment in education. 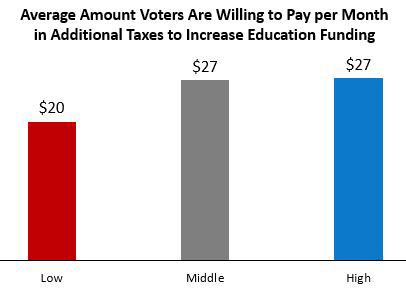 In conversations with voters, our canvassers found that people placed a high priority on education, sometimes even using similar language.

Johannes, a Manassas resident with a history of voting Republican, said, “Teachers should be paid more. Low pay impacts the quality of potential teachers, which in turn impacts the education of the students.” Johannes said he would pay $100 per month more in taxes to support higher teacher pay, adding, “It’s just that important.”

Debra, a 65-year-old white woman, said that she would be willing to pay $500 more each month in taxes. When our canvasser asked her to confirm she was willing to pay $6,000 more per year in taxes, she replied, “Yeah, I know. It’s just that important.”

Despite high public support for raising teacher pay and investing more in public education, few voters were aware of the fact that the Virginia Legislature recently passed an education funding package.

Despite Virginia’s reputation as a low-tax jurisdiction and its 40-year trend of tax cuts and service austerity, these voters are eager to pay for this type of public investment.

Medicaid expansion was popular among swing and base voters, and even 45 percent of Republicans support the expansion.
Last year, Virginia expanded Medicaid under the Affordable Care Act. Our conversations with voters revealed that nearly two-thirds felt Virginia’s Medicaid expansion was the right priority for the state Legislature. 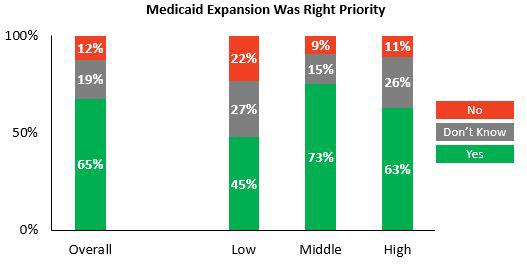 Even though many of the voters we spoke with didn’t expect to benefit from Medicaid expansion themselves, they supported it on principle.

Manuel, a 49-year-old Latinx man, supported Medicaid expansion. He said, “Low-income families need to be able to access health care just like everyone else.”

We also asked voters what they felt Virginians’ biggest challenge was to getting the health care they need. The cost of health care was overwhelmingly the most common response, named by 56% of voters. 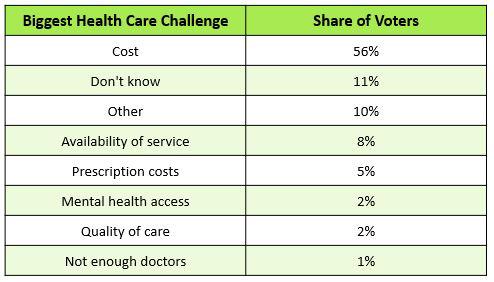 When discussing health care costs, voters often shared personal stories about their difficulties with the system.

Michael, a 34-year-old white man who works as a financial analyst for a government contractor, feels that health care costs are “out of control.” Michael told our canvasser that he paid $4,200 for a threeday hospital stay when his daughter was born. He added, “And that was with insurance.”

Sarah, a 69-year-old white woman, said, “As a senior on Medicare, it’s hard for me to cover the cost of my medical bills. My bills are around $900 every month.” Some specialists have refused to see her when they hear that she’s on Medicare. She agrees with expanding Medicaid and said, “People need to be in good health. Without health, you can’t work. It makes learning difficult for children if they don’t have proper health care, and in general, people really need to be able to take care of their health needs.”

Both in recent Virginia elections and nationally, the availability of affordable health care has been an issue that gave Democrats an advantage. These continued cost pressures for those who have insurance is a clear indication that it will be top of mind for the foreseeable future.

While a majority of voters disapproves of Trump, most lack an opinion about statewide elected officials.

Over the course of one week in February 2019, three of Virginia’s top elected officials became the subject of heated controversy. The public became aware of Gov. Ralph Northam’s medical school yearbook page featuring a person in blackface and another in a Ku Klux Klan outfit, and Attorney General Mark Herring admitted he had worn blackface himself while he was a college student. Simultaneously, two women, Vanessa Tyson and Meredith Watson, came forward with allegations that Lt. Gov. Justin Fairfax sexually assaulted them.

Our conversations with voters took place over several months, from the height of the scandals until a few months afterward. Despite the scandals generating national headlines, when we asked voters whether they approved or disapproved of Northam’s, Fairfax’s or Herring’s job performances, a substantial portion remained undecided.

The chart below shows job approval for Northam, Fairfax, Herring and Trump. Northam had higher name recognition, and significantly fewer voters were undecided about his job performance compared to Fairfax and Herring. 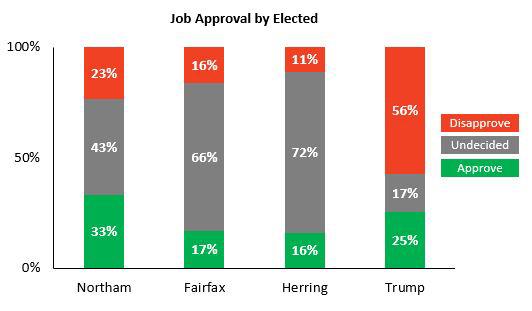 When our canvasser spoke with Ian, an 18-year-old person of color, Ian named Northam as an elected official who fights for working people, although he brought up the scandal and said, “I don’t think he handled that situation well.” He also mentioned that the scandals would affect how he votes in the coming election, saying, “It doesn’t stray my votes away from Democrats, but it will make me think more about what issues we are focusing on.”

Many voters expressed the sentiment that what they viewed as past personal behavior didn’t factor into their opinion on job performance.

Matthew, a 35-year-old white man, said, “The personal controversies don’t matter. The only reason we have heard about them is because of the personal issues, not what they are doing for Virginia.” He thinks it's “still too early” to form an opinion on both Northam and Fairfax.

When it comes to the president, however, voters have strong opinions that are giving Democrats an edge in the 2019 elections.

The chart below shows 2019 vote choice broken down by approval of Trump’s job performance. 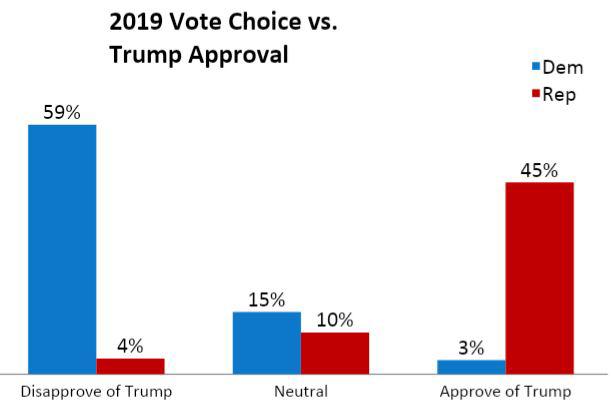 Democrats continue to have an advantage in low-profile races as voters react to Trump as the GOP standard-bearer. It is less clear what this means when there is a Democratic nominee, but the party will undoubtedly make the most of this trend until then.

Most voters can’t name an elected official they think is fighting for working people.

We asked voters, “When you think of an elected official who’s fighting for working people, who comes to mind?” Fully 57% of voters responded “no one” or “not sure.”

Whether they held national, statewide or local office, no politician garnered more than single-digit recognition. 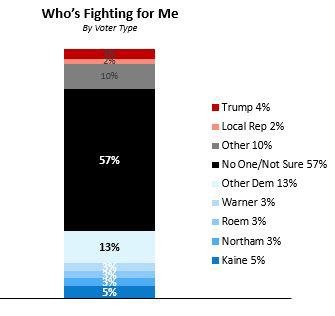 The fact that so many voters can’t name a politician they feel is fighting on their behalf reveals a widespread disaffection with the status quo.