With Tax Day around the corner, hundreds of thousands of working-class people are beginning to experience the Tax Cuts and Jobs Act for what it really is: a conservative tax plan that gave big tax breaks to the super-rich and corporations.

As people file their taxes this year, many are finding that they aren’t getting the refunds they’ve counted on in the past. Carolyn from Ohio shared with us that, “This hurts, since we count on that refund to pay off bills.” For a member from Portland, Oregon, it’s now “making it harder to make ends meet.” 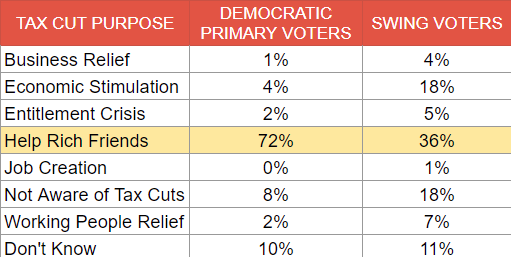 Others expressed frustration with being unable to deduct substantial costs. Some are no longer able to deduct expenses for work, while others have costly medical bills that are no longer deductible. As a member in Wisconsin shared with us, “It’s made our taxes way worse, because medical deductions are no longer allowed. I’ve been ill and unable to work, but we can’t deduct my extensive medical expenses, so we are hurt twice: once because I can’t work and earn money and twice because we can’t deduct my medical expenses. Taking away that deduction was just cruel.”

As our executive director highlighted in a blog post late last year, there was no demand for a tax cut from most voters. Despite the lack of urgency or necessity, tax cuts were one of the GOP’s top campaign promises in 2016. When we asked voters in Iowa what they thought the tax cut purpose was, the majority of Democratic primary voters and a sizable portion of swing voters thought it was to help Trump’s rich friends. Hundreds of miles away, a grandmother from North Carolina wondered, “Why do billionaires get away with minimal tax bills while the rest of us have to pay for their tax breaks?” Well, it’s because the tax cut was a demand of GOP donors, as Sen. Lindsey Graham, R-S.C., admitted.
Fortunately, Working America members know how to hold politicians accountable on the issues that matter to them. As Larry from Michigan warned, “[My] taxes went up and I will make my unhappiness known at election time.”