Ahead of the one-year anniversary of the Tax Cuts and Jobs Act, not only is it clear that the GOP-driven tax cuts are an economic failure (they didn’t reduce deficits or target the middle class) but they are a political failure as well. After analyzing six years of Working America data on persuadable working-class voters, we see that tax cuts have diminishing political returns for Republicans with this voting bloc.

Our 900,000 conversations over the past three elections found that an overwhelming majority of these voters in battleground states don’t classify taxes as a top voting issue. Even though tax cuts were one of the GOP’s top campaign promises in 2016, there was no demand from most voters, although the fact that Sen. Lindsey Graham, R-SC, admitted the tax cut was a demand of GOP donors no doubt explains the urgency. Only 10 percent of the 440,000 working-class voters we spoke to that year said taxes were a top voting issue. Two years later – after the massive $2 trillion GOP tax package was enacted – only 7 percent of 116,484 voters we asked identified it as a top issue. 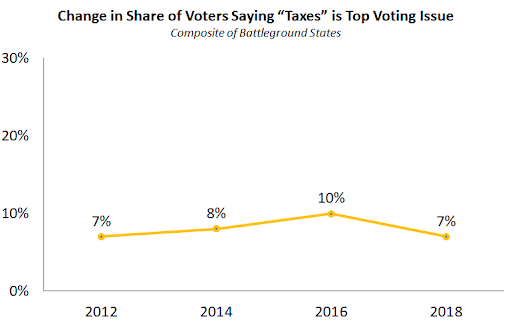 This long-term data aligns with what we reported during last spring’s U.S. House special election in Pennsylvania’s 18th Congressional District. As early as February 2018, Working America identified that the GOP and President Donald Trump were hitting a ceiling on the electoral gains to be made from the tax bill. Up to that point, this area was typical of solid, GOP-held districts. Trump won this district by a 19-point margin and he remained relatively popular there during the special election, outpacing his national approval numbers by 5 points. Yet, even though cutting taxes has been a central plank of the Republican agenda for years and it was Trump’s signature legislation, only 9 percent of voters in the PA-18 special election identified taxes as a top concern. The “tax-and-spend liberal” attacks lost potency with these voters. 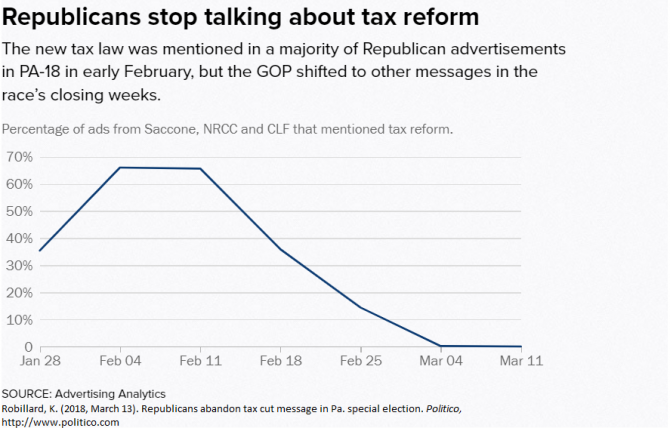 Most humiliating for the GOP, then-Speaker Paul Ryan’s super PAC spent $3.5 million in this losing effort and eventually were forced to abandon their tax message. Turns out that millions from those very donors Graham was so worked up about could not make their agenda popular even with Republican voters.

As Democrats take the gavel in Congress and statehouses around the country next month, undoing this disastrous tax scheme will win them few fans among the GOP donor class, but will win many among the GOP voting class. For a study in contrast of what voters were really demanding this year, we looked at what issues were important and which candidates won these voters. Health care was the juggernaut, but not just in 2018.

In 2012, voters were as likely to be concerned about health care as they were about taxes – about 8 percent (notably, in an election that was a referendum on the ACA). Yet in every subsequent election, anxiety about access and affordability of care increased to what we see today – 23 percent of voters list health care as their top concern.

This tripling of concern about health care shows no signs of abating before 2020 – which should be concerning for battleground state Republicans such as  Sens. Joni Ernst, R-IA, and Thom Tillis, R-NC. Our data shows that when the topic is health care, Democrats have a 10-point advantage over Republicans. 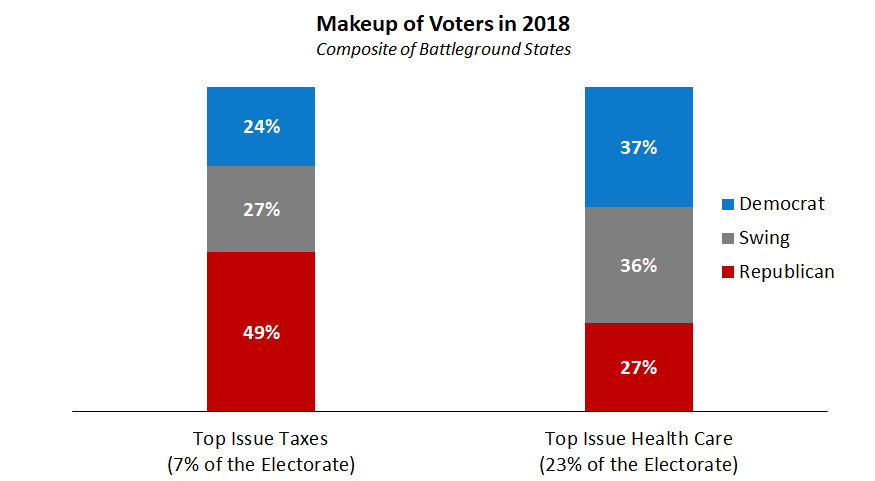 Republicans may have campaigned on their tax cut slogan, “This was a promise made and this is a promise kept,” but they will need a lot more than words to convince these voters in 2020. Equally important, Democrats should see that this is the moment to undo some of the harm of the GOP tax cuts and invest in health care security for working people – the voters are already there.