Working America
Issues
Good Jobs and a Fair Economy
Good jobs, living wages, an economy that works for all of us

Why it matters for all of us

“Globalization.” “Trade.” “Gig economy.” “Income inequality.” Our economy is changing in a lot of ways, but a good job is still at the heart of how well we and our families survive day to day, year to year. At Working America, we never stop fighting to make sure that everyone has the right to a good job that pays a living wage, provides fair benefits and creates safe working conditions — and that the economy lifts us all, not just corporations and the privileged few.

Good jobs and a fair economy don’t just happen. They come from legislation that supports working people and public policies and regulations that put us on an even playing field with big business. That means we need to join together and take action to make sure our voices are heard.

America’s middle class emerged when co-workers came together to form unions, and when they bargained collectively to demand higher wages, better benefits and safety standards. That’s just as important in today’s changing economy, where more people work part-time or in contingent or contract situations.

We’ve won minimum-wage hikes in cities and states across the country, benefiting more than 2 million working people and their families in Arkansas, Maryland, Michigan, Minnesota and Rhode Island. A minimum-wage ballot referendum in Illinois paved the way for increases for more than 1 million people. And we’ve had victories in New Mexico, North Carolina, Oregon and Washington state as well.

In Minneapolis, we have led the way on fair scheduling with retail and fast food; this is especially important for young families needing to make childcare plans and have a predictable income. And we’re challenging wage theft (when employers don’t pay employees what is owed for the time they’ve worked) in Chicago; Houston; and Portland, Oregon.

We also lead fights to defeat “right-to-work” laws, which result in lower wages for working people. Our most recent wins have been in Missouri and New Mexico; in Kentucky and West Virginia, the state found ways to override our efforts. We don’t succeed every time, but each effort reminds elected officials that we will hold them accountable for their actions and educates the community about the issue.

We also mobilize against unfair trade deals that erode our manufacturing base, and we fight unfair tax breaks for corporations, which rob us of the revenue we need to improve our economy. Members in Florida, Ohio, Pennsylvania and Texas have been especially active in our efforts to stop the Trans-Pacific Partnership trade agreement — and so far, we’ve stopped it in its tracks!

We fight to hold companies accountable for shipping our jobs overseas, and we hold elected officials accountable to protect our rights and our safety at work. Above all, we unite working people to help make that happen. 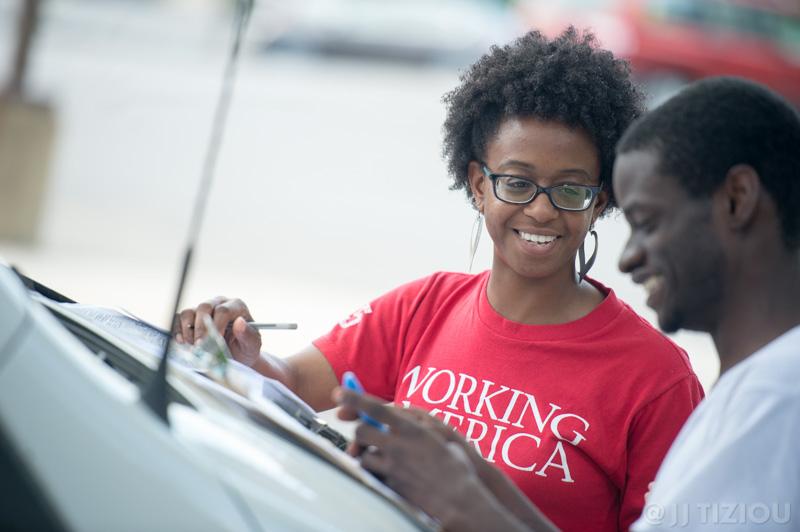 November can’t be the end of our interest in policy; it’s the beginning. A new presidential administration gives us an opportunity to hold the people we’ve elected to their promises. We mobilize our members to demand a major infusion of good jobs and advocate for funding to rebuild our country’s sagging infrastructure. And we’ll be making sure that any trade deals we sign are good for working people here in the U.S., and that standards for the fair treatment and for environmental impacts across the globe are part of the package.

We will also unite with allies to pass new regulations to rein corporate tax evaders and Wall Street profiteers so that we can begin to restore some balance to an economy that has left too many working people without a path into the middle class.

Actions on Good Jobs and a Fair Economy

Good Jobs and a Fair Economy

Tell your senators to Build Back Better

Tell Your Representative: Vote YES on the HEROES Act (H.R. 6800)

>
Good Jobs and a Fair Economy

Statement on the Life of Gerald W. McEntee, Founding President of Working America

Working America Congratulates the AFL-CIO on Its Historic Election