Working-Class Voters Reject ACA Repeal, Are Less Likely to Support Politicians Who Vote for It

Working-Class Voters Reject ACA Repeal, Are Less Likely to Support Politicians Who Vote for It

With lawmakers in Washington considering a quick repeal of the Affordable Care Act, Working America went into the field to talk with working-class voters about the ACA. We visited five central Ohio communities and had front-porch conversations with Clinton, Trump and third-party voters to get their thoughts about health care generally and the prospect of ACA repeal.

ACA repeal has become a pressing concern for working-class voters—a shift from before the 2016 election, when jobs and the economy were by far the dominant issues. Now that repeal is a real possibility, working people seem very concerned about the future of the ACA. We found that voters from across the political spectrum are wary of repeal. And yet there is still a significant lack of knowledge about the ACA, what its repeal might mean and what politicians’ positions are on the law.

At a time when the ACA has been roiling town halls and the halls of Congress, we surveyed people about various aspects of the law and got intriguing responses. From Feb. 10 to Feb. 16, we canvassed 364 registered voters, 96 percent of them from households making $75,000 or less a year. Forty-three percent identified themselves as having voted for Hillary Clinton in November, 26 percent said they voted for Donald Trump, 16 percent wouldn’t share their presidential choice, 5 percent said they voted for a third-party candidate, and 10 percent said they didn’t vote. Among all respondents, 17 percent said they or someone in their family had gotten health insurance through the ACA. The vast majority of people we interviewed were white (86 percent); 12 percent were African American and 2 percent were Latinx. A summary of our findings appears below.

Across America, people have all sorts of opinions about the Affordable Care Act. President Trump has called it a “total disaster,” while Democrats maintain that the ACA has brought quality health care to millions. We tested these claims by going directly to the homes of working-class Ohioans and asking about their experience with the ACA. Overall, 17 percent said they or someone in their family had received health insurance through the ACA.

Our canvassers asked people who had enrolled in marketplace coverage how they feel about it, and 62 percent report having a positive experience. Here is a sample of their comments:

Kenny, a white voter in his early 30s from Westerville, is raising his special-needs son on his own. All of his son’s doctors are covered by his ACA plan. “The ACA was much needed,” Kenny says, and he worries how repeal would impact his son. “Why is this a partisan issue when it is supposed to benefit all of us?” he asks.

Judith, 75, from Gahanna, says her sister-in-law’s monthly prescription costs have dropped from $475 to $40 because of the ACA. She tells “anyone who will listen” that her family has benefited greatly from the law.

Ariel, a 24-year-old from Westerville, says he has been able to stay on his father’s insurance plan because of the ACA, and he thinks the law should go even further. “Germany has had some sort of universal health care since the 1800s,” he says.

Of course, not everyone is satisfied with their ACA coverage; 25 percent of people with ACA coverage in their family told us they’ve had a negative experience. Here are some of their thoughts:

Robert, 53, a white voter from Grove City, “hates” his ACA coverage and doesn’t feel it’s affordable at all. He says he has a $7,000 deductible and is afraid to go to the doctor. He plans to drop his coverage and pay the fine. Although he blames insurance companies for the law’s problems—“they’re the real fat cats”—he feels the ACA should be repealed.

Trump voters Philip, 51, and Marie, 50, a husband and wife from Reynoldsburg, say their insurance is “crap.” Since the ACA passed, they have a higher deductible, higher co-pays and higher costs in general, they say. In addition, Marie believes her health care spending is helping to pay for abortions. She and Philip favor immediate repeal of the ACA and don’t care about a replacement.

While the ACA stirs strong feelings in some, the majority of working-class voters we talked to do not have a lot of information about the 2010 law and say their health coverage has not been impacted since its passage. Overall, 71 percent say the ACA has had no impact on their health insurance plan. Even a majority of Trump voters (53 percent) say the ACA has not affected their health plan, suggesting a need for widespread education.

Except for the most ardent ACA opponents, most working-class voters we canvassed believe Americans should have access to affordable health care. “Don’t pull the rug out from under people” is a common refrain we heard on the doors, and many people feel strongly about the issue: 1 in 4 voters say they are willing to take action to prevent ACA repeal.

Overall, 87 percent of working-class voters say the ACA should not be repealed before it’s replaced. Here is what they’re saying:

Repeal would “leave people like me with nothing,” says Sonja, 32, a mother of two and a Clinton voter from Westerville who has had insurance through the marketplace for a few years.

Pamela, a white 56-year-old from Gahanna, had an uncle who was denied insurance due to a pre-existing condition. This was before the ACA was enacted. When told he’d need to go on dialysis, he killed himself rather than bankrupt the family, she says, adding that now, “thanks to the ACA, people are not driven to such extremes.”

Despite the widespread reticence about repeal, 13 percent of the 254 voters who addressed this topic in our survey do support repealing the ACA before replacing it. 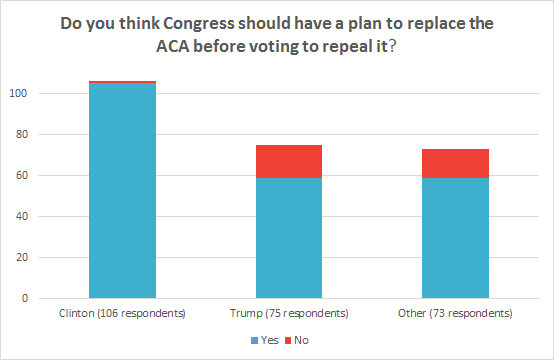 Among the minority willing to pass repeal without a replacement, this was a representative comment:

Sean, 31, from Reynoldsburg, thinks “poor folks” shouldn’t be draining the system and should get jobs instead. His employer doesn’t offer health insurance, he says, so he pays the fine to avoid spending $300 a month on an ACA plan. He favors immediate repeal.

Nevertheless, among most people we talked to, there was real unease that many Americans might lose health care if conservatives undo the law. Many people with reservations about the ACA, including some who strongly favor repeal, expressed concerns that good aspects of the ACA could be lost.

Ashley, 32, a Trump voter from Westerville, was unhappy when a caseworker tried to steer her to Medicaid. “I wanted to pay for my own health care,” she says. She doesn’t think “hardworking people should foot the bill for Obamacare.” But she also opposes repeal without replacement because she doesn’t want to see people lose health care.

Amy, 57, a Trump voter from Powell, says ACA “coverage is no good. Prescriptions are so expensive.” But she likes the ACA’s policy on pre-existing conditions and would like to see that kept.

Little Information and Lots of Confusion

Years of misleading messages have led to widespread misinformation and confusion about the ACA in working-class communities. The voters we surveyed often seemed unclear about the difference between Medicaid coverage and health insurance purchased through the ACA marketplace. Even people on the plans were sometimes confused about which coverage they had.This confusion and lack of information help explain some of the choices voters made in the 2016 election:

Lisa, 46, is from Gahanna and didn’t have insurance before the ACA. She found the website easy to use, got coverage and has had a relatively positive experience. Nevertheless, Lisa says she’s not familiar enough with the ACA to know if it needs fixing. In 2016, she voted for Donald Trump. “I’m just hoping for the best,” she says.

The lack of information about the ACA—even among people benefiting from the law—shows that progressives have much work to do to educate voters about how it has improved health care and which politicians are working to roll it back.

Even in Ohio, which was flooded with political advertising in 2016, few working-class voters could identify their elected officials’ stance on the ACA. Overall, 76 percent of Ohioans we talked to did not know either of their senators’ positions on the ACA. Even though Sen. Rob Portman was on the ballot in November, only 19 percent of voters could correctly state that he favors repeal.When voters are educated about a politician’s position on the ACA, it should benefit progressives. Overall, 55 percent of working-class voters we surveyed think ACA repeal would have a negative impact on America. At door after door, we heard people calling for ACA fixes rather than repeal, even among voters unhappy with the law:

Kathryn, a white voter in her early 30s from Westerville, was billed for an extra two months after dropping ACA coverage she disliked. Nevertheless, she’s angry that “instead of trying to fix the problem, the Republicans waste time trying to repeal it. Why can’t our elected officials work to help us instead of fighting each other?”

Carol, 71, a white Clinton voter from Gahanna, worries that her daughter’s ACA premiums are too expensive. According to Carol, “When they say it’s affordable, it’s misleading.” Still, her daughter likes her health care plan, and Carol believe that “everyone should have health care.”

Voters say they’d be less likely to support a politician who voted for repeal. In our canvassing, 46 percent of voters said they’d be less inclined to vote for a member of Congress who backed repeal, while 15 percent said a pro-repeal stance would make them more inclined to back a candidate. Narrowing to just those people who have received ACA coverage, we see a far more intense backlash against elected officials who support taking away coverage.

Unlike traditional public opinion polling, which is based on a random sample of people representative of a given population, we targeted working-class neighborhoods in five central Ohio communities. Ninety-six percent of the people we spoke with were from households making $75,000 or less a year, and 17 percent said they or someone in their family had gotten health insurance through the Affordable Care Act. Our sample is not representative.

As far as a demographic breakdown, the canvassed population skewed female (56 percent), and the vast majority of respondents were white (86 percent), with African Americans at 12 percent and Latinxs at 2 percent. The predominant age groups were people in their 30s (25 percent) and 50s (23 percent).

Among white respondents, 18 percent said they or someone in their family had gotten health insurance through the ACA; 21 percent of African Americans reported ACA coverage, and 0 percent of Latinxs reported ACA coverage. Canvassers sought to gauge how much people knew and how they were feeling about the Affordable Care Act as well as their opinions on its possible repeal. Individuals could choose not to answer a specific question, which resulted in slightly different totals for each response.

The five Ohio towns where we canvassed were Westerville, Reynoldsburg, Powell, Gahanna and Grove City.